Gradient Mapping - An Awesome Way to Get Cheap Variation in Textures

I was reading over the Left4Dead 2 zombie variation techniques when I read about how they used gradient mapping to add crazy amounts of variation to their zombies. In the FX world, we used to use gradient mapping for things like fire and clouds to get some interesting color transitions,  but I don't remember ever hearing about people using it for anything other than that, since it's a relatively difficult concept to grasp unless you have someone show it to you. Not only that, but once you decide to use gradient mapping in your workflow, you have to have a custom shader written for it, and you need to educate your character artists on the best way to texture their assets so that they will work well with the gradient mapping technique.

I thought this was a great idea, and it was clearly the most optimal method to get variation among vast numbers of zombies in that game. So I started wondering what the possibilities would be if I applied the same technique to general props in the environment. First i realized that whatever scene you were making would have to justify using this unorthodox technique. In other words, I wouldn't really use the technique unless I had a scene where I really needed to re-use texture assets and have a high amount of color variation. I wouldn't use this technique to make a bunch of different brick textures, because frankly i think it would be a bit unnecessary. However, I would use this technique if I had to make something like a market, where you'd need lots of different fruits, spices, and other various props that you may want to reuse with different colors.

Since there's going to be a bazaar in my scene, i realized that gradient mapping would fit perfectly for generating a large amount of various colors for bazaar booths that reuse the same assets over and over, but in different scales and colors. This is a perfect opportunity to test this technique out, so I started doing some tests. 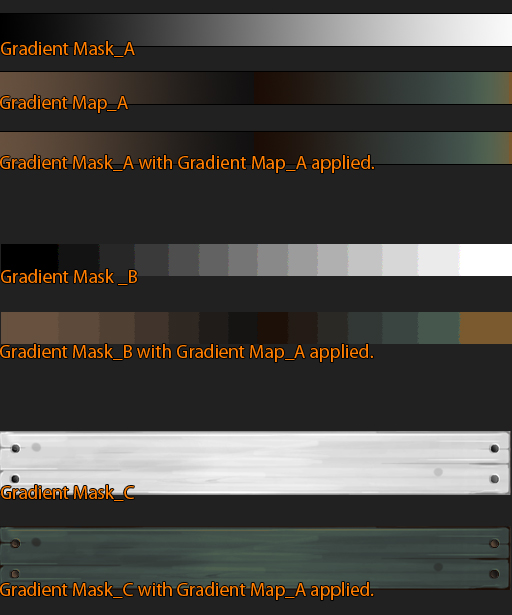 Think of GradientMask_A as a constant. This is ALWAYS how you are going to visualize how the engine will interpret your gradient map. The reason for this is because when gradient mapping is applied in the engine, we are actually using the X channel of our texture coordinates as our base "lookup" table. This will always look like GradientMask_A, because the X channel of the texture coordinate data is always going to be 0 to 1, which will always be visualized as a gradient starting with black on the left that changes to white on the right. 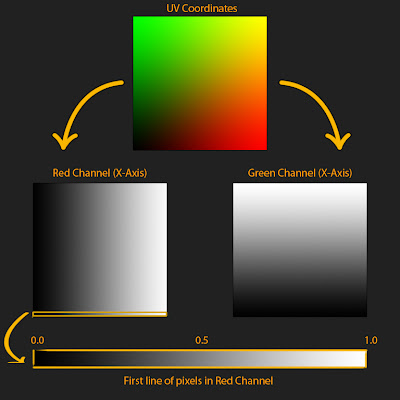 This is probably the hardest part to really understand about how gradient mapping works in a game engine. Think of GradientMap_A as the map we'll be importing into the engine. When we apply a gradient mask to this, what it is doing is looking up the UV coordinates of our gradient map, and taking the color value of that pixel and mapping it to any pixel in our gradient mask that corresponds with that value in UV space... so really, a gradient mask is simply an 8 bit 2D texture coordinate map!

So now that we know that the standard black to white gradient is a constant that won't change, we can start calling it our "Gradient Coordinate Table". Lets look at some actual examples of what a decent gradient map can achieve.

When you assemble the shader in UDK you get pretty much the same result you see in Photoshop. 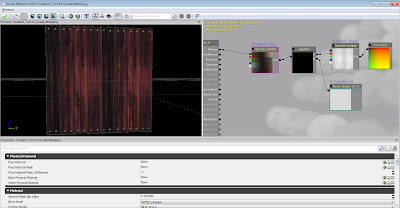 The node labeld Y-Coordinate is the coordinate along the gradient map texture... so setting it to 0.7 would set it just about along the lines of the 3rd gradient down, which gives us what we see in the shader preview window. It's a pretty easy setup too.
If you want to learn a bit more, check out Valve's power point on the subject that I linked at the top of the post.
Cheers!
Posted by Ryan James Smith